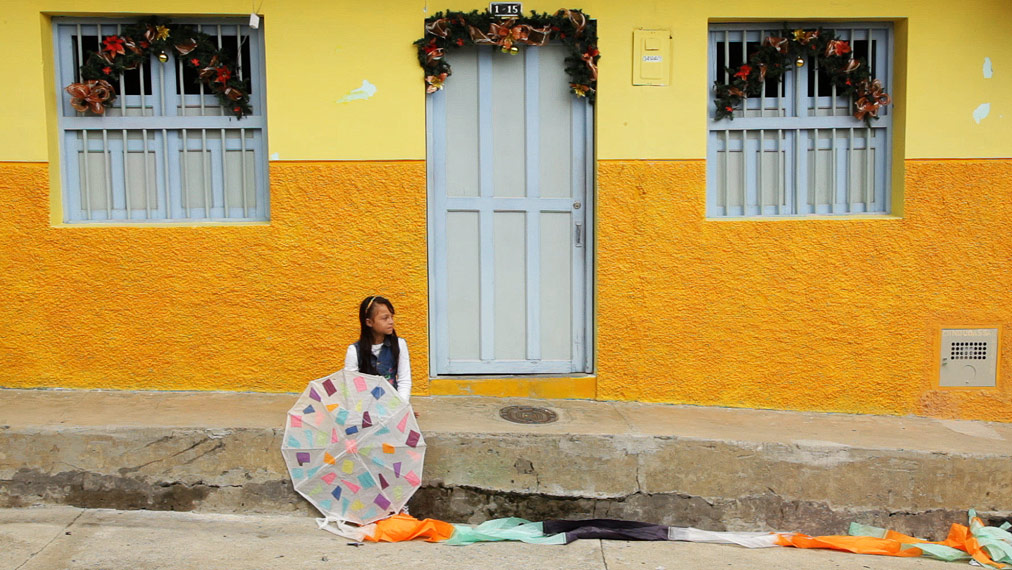 Catalina Mesa, the first female filmmaker from Colombia at HotDocs discusses her directorial debut, The Infinite Flight of Days. The film is a charming, energetic, and hilarious documentary about the lives of women in Jericó, a small town in Colombia.

Catalina Mesa’s debut feature, The Infinite Flight of Days, is a charming, energetic, and hilarious documentary about the lives of women in Jerico, a small town in Colombia. Mesa makes ordinary objects and surroundings extraordinary by lighting them beautifully and using slow tracking shots to intimately connect us to these spaces. This film truly celebrates the feminine spirit! When the film premiered at HotDocs earlier this month, I sat down with the multi-talented Mesa, who also shot the film, to discuss the making of the film, her influences, and what she hoped to achieve.

The Infinite Flight of Days was born out of Mesa’s personal connection to Jericó: her family on her grandfather’s side hail from there. Because she and her Great-Aunt in Jericó were both, in Mesa’s words, “the writers of their generation”, they became very close. When her Great Aunt was about to pass away, Mesa came back to the town to film her sharing stories and folklore about growing up in Jericó. This was the first spark of inspiration, which several years later, led to The Infinite Flight of Days.

In order to find the subjects in the film, Mesa surveyed the women in the town. Once she met with one woman who worked there, “a symphony of synchronicities began to happen.” She was introduced to 20 women, and then she narrowed them down to 12 participants. She lived with these women for a month and a half, filming the documentary over a two and a half month period. Mesa described the making of the film as a real collaboration between the subjects and her. “The film was born into their day by day,” Mesa explains, “I was kind of picking up the fruits of their reality”.

When I asked why Mesa chose to focus mainly on widows and elderly single women, she said, “I never thought I was going to [discover] lonely women.” Though this focus wasn’t Mesa’s original goal, it’s what presented itself while she was making the film. Despite the hardships these women had faced, “they’re never victims, [and they embodied] fragility with a lot of strength. They tell this really painful story, then they laugh. I thought that was so incredible. We don’t see this intimate aspect from the community being celebrated, being valued as a beautiful thing”.

Mesa’s optimistic film is a counterpoint to the current trend she sees in Columbian cinema to focus on contemporary violence. Mesa describes Colombians as, “so embedded into conflict. It is [an] important point of view, but it’s not the only aspect of our reality. We also need to see our beauty — what makes us live”. Nevertheless, The Infinite Flight of Days does feature the story of a grieving mother whose son was abducted by guerilla soldiers. Mesa felt this story helped  “to show a Kaleidoscope of the feminine spirit [and] unfortunately Colombian violence has [touched] women this way. I need to acknowledge the pain that these women went through. I needed to respect that colour of the kaleidoscope”.

The Infinite Flight of Days didn’t come to Mesa right away as a title. She initially planned to call the film Echoes of Jericó. But after watching the film, she felt that was too limited in scope. “This [film] is universal [and] could be any other village. I don’t want to narrow [the film] down to Jericó.” Because Jericó is a hub for poets and poetesses, Mesa wanted to include work by local writers in the film. The film opens with the following poem:

“My Nobel Jericó us charming

Embedded in the mountain sun,

And infinity entering my cabin”.

In the film, Mesa explores how, “infinity incarnates [into] the [simplest] things of everyday [life.]” The flight part of the title refers to the main festival in Jericó, the kite festival. Mesa added, “It’s very hard to fly a kite. There’s a lot of technique to it.” The film represents how “everyday can be a flight. Everyday allows to reveal something deeper”.

When asked why, as the cinematographer for her film, she focused her camera on the women’s objects, such as their jewelry and household items, she clarified, “Photography is just my reflection and how I see things. [I have] respect for ordinary objects. I needed to portray [the] extraordinary in the [simplest] things.” Mesa cited Gaston Bachlelard’s book, The Poetics of Space, which dedicates a chapter per corner of a house. “The space is just another projection of your being,” Mesa added, “Everything around is a part of the spirit of the person”.

Mesa wanted to make the film “playfully musical because it expresses the joy of the culture.” Mesa uses the music from her “Great Aunt’s playlist,” mostly latin big band tunes from Colombia presumably from the 1940s-1960s. This Colombian music, mostly 1940s-1950s big band music, added so much colour and energy to the actions on screen. Mesa emphasizes that the music “was [about] capturing the zeitgeist of [Jericó]. The music in Colombia is super important. I took music that I’d heard my whole life.” It was also the music we see the people of Jericó dancing and singing to in the film.

Although the number of female filmmakers in Columbia is increasing, Mesa is the first Colombian female director at HotDocs. “I’m so grateful to HotDocs and Women in Film and TV Toronto [and] I’m very excited for [my film] to be distributed in Colombia [with] a more feminine lens – celebrates the culture through beauty and humour.” Mesa, who is as delightful and charming as her subjects insists in closing, “[The film is] not really about me, but sharing another color, another perspective of the culture to the world”.